I love using math games in the classroom, especially those that are simple to use, quick to learn and effective. Below I have 5 of my favorites. These have also been favorites with many students over the years. 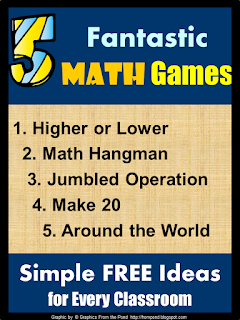 This is a simple game that helps to develop number sense.
It is a ‘Guess my number game’.
First decide the upper and lower limit for the number, i.e. is it between 0 and 100 or 100 and 1000.
One person is IT. This might be the teacher or a student.
IT thinks of a number and writes it down without telling or showing the others.
The other players take turns guessing the number and listening to the clues given by IT.
These clues will only be ‘Higher’ or ‘Lower’.
IT says ‘Higher’ if their number is higher than the guessed number or ‘lower’ if their number is lower than the guessed number. The winner is the person who guesses the number.

Variation - Higher or Lower - Decimals
Played as above but with a decimal number instead.
Decide how many decimal places the number will have before starting, i.e. 1, 2 or 3 decimal places, e.g. Players could be told that the number is between 2 and 4 and has 2 decimal places. (2.56) 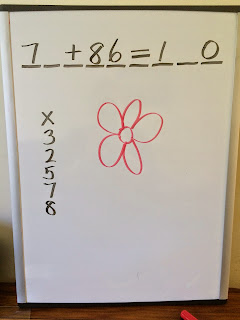 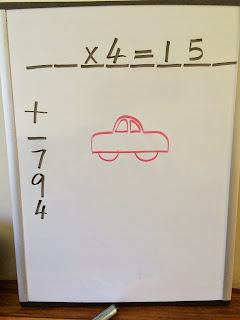 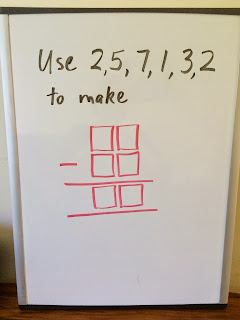 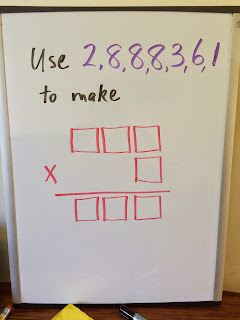 This is a game for a small group or the whole class can be broken into teams to play. You will need a pack of playing cards with the picture cards removed. Aces are to be 1.

Shuffle the cards and place them in a pile in the center or spread out cards face down. One player chooses three cards and shows them to the other players. Each player tries to use the numbers on the cards to create an equation that equals 20, e.g. 7+8+5=20, 2x8+4=20, 5x5-5=20, (1+3)x5=20.
For each equation that the player creates, they score one point.
Choose another 3 cards for the next round. Play as many rounds as time allows.
For a more complex version play the game using a higher number, e.g. 50 and use 5 cards for each round. Players may use all 5 numbers in their equation or some of the numbers.

This old favorite has been used for many years, but students always love the challenge.
Players sit in a circle. (In the classroom students can remain in their seats.)
A player attempts to move all the way around the circle (or classroom) without having to sit down.
One player stands behind another player.
The caller says a fact, e.g. 3X4.
The first player of the pair to say the correct answer then stands behind the next player while the other one sits.
Play for as long as time allows or see if a student can move Around the World (around the circle or around the classroom).

Use this game to review addition, subtraction, multiplication or division facts or other math questions or skills. 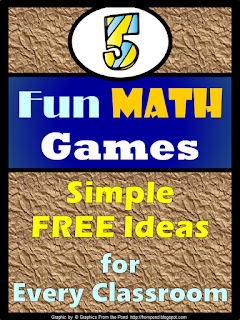 Remember you can download the 5 Fun Math Games on printable cards at
https://www.teacherspayteachers.com/Product/Math-Games-1842203 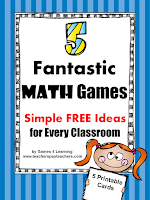 I really hope that you enjoy using these games as much as I have!
Fun Games 4 Learning at 05:44
Share